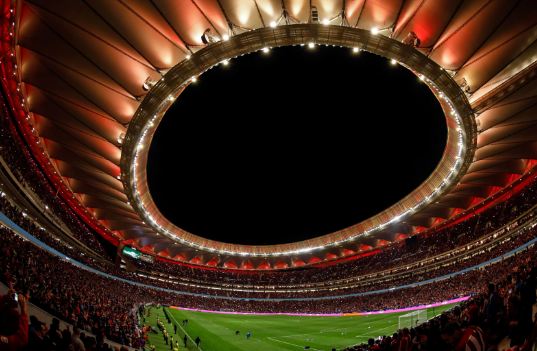 It’s hard to imagine that the new ultra-modern, Wanda Metropolitano, a 5-star UEFA stadium and recently named “Best Stadium in the World” at the 2018 World Football Summit, was for many years just an abandoned stadium on the outskirts of Madrid.

Inaugurated in September 2017 as the new home of Atletico Madrid, the arena actually dates back to 1994, when it was built in the eastern part of the city, in preparation for the 1997 World Athletics Championships, which in the end took place Athens, and not in Madrid. From that moment, “La Peineta”, as it was nicknamed because of the comb shape of the stands, was used only for some second-tier sporting events and it eventually became abandoned by 2004.

In 2011, Atletico Madrid identified it as an alternative to their historic home, the Vicente Calderón, which due to its location (on one side bordered by the Manzanares river and on one side bordered by a motorway) could not be extended. After six years of work, the stadium was inaugurated on 16 September 2017 for the La Liga game between Atletico Madrid and Malaga, which finished 1-0, thanks to a goal from Antoine Griezmann, who will thus go down in history as the first-ever goalscorer at the Wanda Metropolitano.

The name of the stadium comes from sponsorship partner, “Wanda Group” and the second part is a tribute to the “Metropolitano”, the stadium that hosted Atletico before their move to the Vicente Calderón in 1966. With a capacity of around 68,000 spectators and with the latest technological advancements, the “new Peineta”, is truly one of the jewels of European and World football, so much so that it was chosen to be the venue for the 2019 Champions League final.

However, the Champions League won’t be the first final hosted at the stadium, as last season the Copa del Rey showpiece between Sevilla and Barcelona took place there. The match finished 5-0 to Barcelona, as Andres Iniesta, who scored one of the game’s goals played his final match for the club.

Juve won’t be the first Italian outfit to play at the ground either, as in last season’s Champions League, the Colchoneros faced Roma, winning 2-0 at home, thanks to goals from Griezmann and Kevin Gameiro.

Curiously, before 2017, Atletico Madrid had already played a match in what would later become their home. The old site had in fact hosted the second leg of the 1996 Spanish Super Cup against Barcelona, with Atleti winning the game 3-1, despite losing the tie overall 6-5 on aggregate.

Van Dijk to present UEFA cheque to ICRC cause