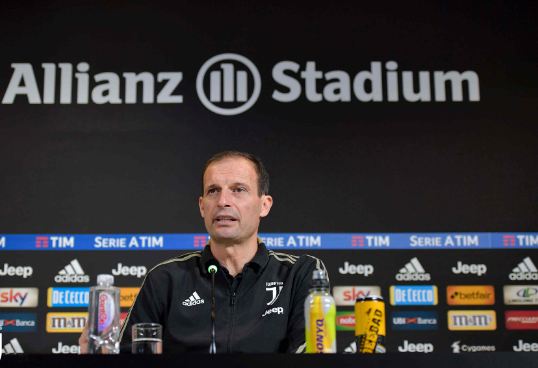 Allegri: We must return to winning ways

After the draw against Parma, Juventus will return to the field tomorrow against Sassuolo in Reggio-Emilia. Today, at Allianz Stadium, Massimiliano Allegri spoke about the game in the press conference.

“Sassuolo is a team of quality and enthusiam, despite their position on the table. We have to return to winning ways. We have a championship to play and win. When the Champions League arrives, only then will we think about it. Everyone must be at their best phsyical and mental condition,” he said.

TOMORROW’S FORMATION
“Wojciech Szczęsny will return in goal. In defence, Mattia De Sciglio along with Daniele Rugani, Martin Caceres and Alex Sandro will play. João Cancelo could be a great change during the course of the game, even further up. There is still a doubt over whether to play Paulo Dybala or Federico Bernardeschi. If Dybala plays, then he will play with Bentancur or Emre Can. If not, then Khedira will play with Bernardeschi. Regarding the injuries, we are at a good point: besides Cuadrado, Barzagli, Bonucci and Chiellini will return to training next week. If Barzagli isn’t available for the match against Frosinone, he will be for the Champions League or just after that.”

THE BIANCONERO MIDFIELD
The Juventus coach then spoke about the midfielders: “Khedira is a player of international standing, he came back well. He’s mentally fresh. In the last game, he had good shots and in the midfield his presence was felt. I am generally happy about our physicality. From the tests we did on Wednesday, the condition of the team is good and improving. Matuidi? He’s well, he had a good game last Saturday.”

CACERES AND CANCELO
“Caceres is a great player: when it’s needed, he can also play as a centre-back. Cancelo has grown a lot, and he must still grow in the defensive phase on the game. However, he is an extraordinary player. With the ball at his feet, he’s at a high level.”

DYBALA’S MOMENT
“Dybala has apologised to everyone and he’s understood that it was not a suitable attitude,” commented Allegri after the Argentine left the substitutes bench during the match against Parma. “Juventus gave him an important responsibility while wearing the No.10. When Chiellini isn’t there, he’s captain. He hasn’t changed his way of playing, what has changed is the way people play around him.